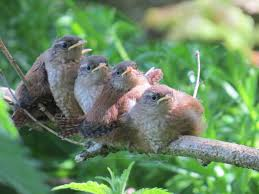 I have been writing a number of blog entries about my teaching experiences, but have included some family stories and now, another story about my experiences as a volunteer in a wildlife clinic.

I am working on a blog entry about the ethical dilemmas facing teachers in this era of standardized teaching and standardized tests, and hope to post that entry very soon. The following story was one that I related to Carol when I came back from my morning work at the wildlife clinic. She said it sounded so much like a children’s story that I should put it on this blog – so here it is!

I was feeding two small northern wrens that were kept in an incubator. Another volunteer was assisting in that work. The two wrens were not gaping (opening their mouths for food), so I took one in my hands and was attempting to feed him. He could not fly, but he could hop like a mad hatter. The wren was very young, and not much larger than a quarter of an inch long. As I was manipulating the syringe, he hopped out of my hand and onto the table. I did not want to hurt him so I did not grab him quickly and he had enough time to hop to the floor. It then became a mad chase to find him behind all of the incubators, cages, and shelves in the bird room. We closed the door so he could not escape, and we following him as he hopped around the perimeter of the room until he reached the door – then he disappeared. We had no idea where he was but another volunteer opened the door and told us that there was a little bird in the hallway! He had squeezed himself through a tiny opening at the bottom of the door. We searched for him for ten minutes and could not find him. The rehabber told us that he was a scared bird and we would not find him easily – it would be best to just leave him and come back and check on him. Eventually he would come hopping out into the open.

Every few minutes or so one of us would go into the hallway, but we had no luck spotting him. Next door to the bird room is a room where we keep snakes and turtles. There is also a large indoor cage where Tabitha resides. Tabitha is a black vulture that cannot be released and she serves the clinic as one of our wildlife ambassadors when the clinic presents demonstrations for schools and other groups. After a short while, the third volunteer came into the bird room and excitedly told us that the wren had just hopped into the room where Tabitha is kept. I ran into the room with a small net and saw the wren hopping around the inside of Tabitha’s cage! I asked the volunteer to get the rehabber – I would need some help – and quickly! I don’t think Tabitha had noticed the wren – thank goodness! I was pretty sure that the wren would not fare well if it were noticed. As I approached Tabitha’s cage she came over to me and jumped repeatedly at the cage door – that is pretty typical since she does not like to be disturbed. It is not really dangerous for volunteers since we know how to deflect her attention, but I could not keep her occupied and net the wren at the same time. The rehabber then came in, took the net, and successfully netted the wren. When I told Carol this story she told me that it sounded like my job was similar to the rodeo clown who is supposed to get the attention of an angry bronco. I definitely felt like a clown – but I also felt responsible for the safety of that tiny wren!

We were able to return that tiny wren to a comfortable netted cage in the bird room and her adventure for that day was over!

Teaching and learning takes place in unexpected places. The lesson for today seemed to be about perseverance, survival, and responsibility. It seems that every time I work at the clinic, there is always something new to learn.