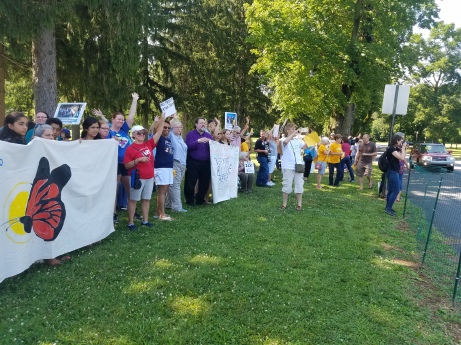 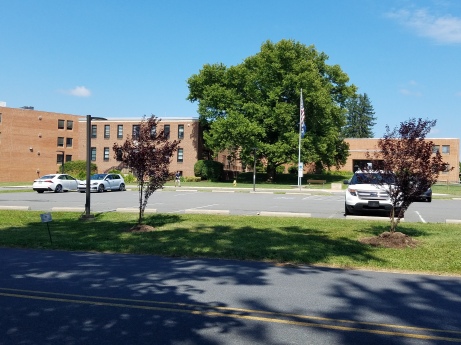 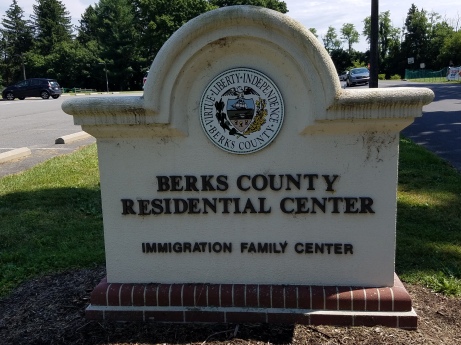 When I talk and write about the Berks County Detention Center (BCDC) I am amazed at how many people, some of whom actually have a social conscience, do not know about its existence or its nefarious purpose, so I thought a description of one vigil that Carol and I attended, some of the actions taken there, and some of the people who were present may be helpful in educating the public. I have written a number of facebook entries about that vigil and I encourage readers to go to facebook and read those posts. If you are not friended with me and wish to read them, please send a request and I will respond.
The vigil that we attended took place on the third Sunday of June, 2018. The BCDC is located on a large tract of municipal property in rural Berks County. On that property you will also find the Berks County Prison, a community center of some kind, a summer camp, and Berks Heim among others. Berks Heim is the county home for Berks County. I worked there for a short while after I was discharged from the military. Heim is a German word for home. The Heim is the last resort for the elderly at or near the poverty line, and back then it was a sad and sorrowful place. There were many kind and friendly residents there, but a lot of them had been abandoned by family and were fully aware of their circumstances. The staff did the best they could to try to make it home like, but supplies and resources were lacking. It has since been remodeled, and I hope that conditions have improved on the inside as they have on the outside.
All of the above mentioned facilities had prominent signs directing you to them – all of them except BCDC. There are no signs indicating its existence and we had to drive around for fifteen minutes to finds it. We finally followed the signs for Berks Heim (that I had resisted earlier because I worked there before and knew it to be the only facility there). Lo and behold, the BCDC was practically next to the Heim. Interesting how there are no signs indicating its presence. Why would that be?
ACTIONS TAKEN AT THE VIGIL
The monthly vigils are sponsored by local religious communities. I discovered that local Quaker meetings and a Unitarian-Universalist church are among those sponsors. At the June 2018 vigil there were about 200 people present – and about 25 people who had a sit down protest in the street and were later arrested. I wrote about this protest on facebook and, again, please go to my facebook page to read about that. The BCDC is across a small two lane roadway from the patch of grass and trees the vigil keepers are allowed to use. If you cross the street, as I did to take pictures, you will be approached, as I was, by a security guard who will pop out of a sedan and tell that you are trespassing. I took my pictures and then crossed the street to the vigil. The BCDC is a two story brick building that takes up about a hundred or so yards of property. The vigil keepers are equipped with megaphones and signs and spread out over as much of those hundred yards so that as many of those detained inside can at least see the presence of the vigil. Short speeches and greetings, in Spanish and English, are shouted so that the people inside may hear them. There were also the 25 people who were arrested. I wrote a facebook entry about them and what happened and, again, I encourage you to read my previous facebook posts on this matter.
PEOPLE AT THE VIGIL
Some of the people were noteworthy and I will write about a few of them. Three people were ‘veterans’ of prior vigils and helped to fill me in on the history of the vigils. One was a minister who informed me that this vigil was sponsored by the Swarthmore Quaker Meeting, so local churches are not the only ones serving as sponsors. You, the reader, could consider having your congregation be a sponsor – it would help spread the word about the BCDC and encourage more people to attend a vigil. Another person who stood out was a man who, when the 15 protesters sat down and the police cars started appearing in large numbers, stood in the middle of the road and blocked the cars from going to the group of 25. Some people were not so helpful. There was a woman, dressed in black, who at first appeared to be part of the vigil, but I observed her signaling the security guards and later crossing the street (and not being told to return to the vigil side as I was) and talking to a police officer who seemed to be in charge. There was a young man who approached me as I was taking pictures of the sit down protest (and heaven forbid, I was standing in the street) and tapped me on the shoulder and said I should protect myself and return to the vigil side of the street. There was another middle aged man who I heard tell a person he was standing next to that he should not participate in yelling in support of the sit down protesters. These kinds of folks are a weak link in the attempt to close down the BCDC.
WHAT CAN YOU DO?
Here a few suggestions:
• Attend a vigil (held the third Sunday of every month)
• Ask your congregation to serve as a sponsor
• Donate money
• Write Governor Wolf and encourage him to close down the BCDC
• Write the County Commissioners of Berks County and encourage them to do the same
I have provided links on my previous facebook posts for some of these actions. I encourage you to become citizen activists. Now is the time.