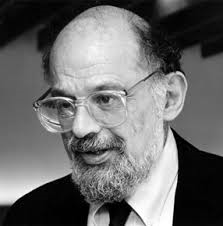 OK class, which one of these three does not belong?

Two of these folks could speak and write in compete and coherent sentences and at times their language was profound and poetic, but this is not the reason that I have chosen these three names to write about this time.

Yesterday was my birthday although that is not the reason that I write today. ML King was assassinated on April 4, 1968. Allan Ginsberg died on April 5, 1997. I recently read Julius Lester’s reflections about the death of Allan Ginsberg. Lester wrote about how Ginsberg’s poetry affected him even though he was not fully aware of what changes had begun in his thinking after he first read Ginsberg’s poetry. That thought resonated with me because I was changed by the words and actions of both of these activists, and I, like Julius Lester, was not aware of what those changes were – I was certain that what they were talking about would stay with me for a long, long time. I was first exposed to MLK by seeing him on television and reading about him in the newspapers. It was hard, at that time, for me to fully connect with his message. I grew up in a small town – racially isolated and far from some of the events I was seeing on TV at the time. I was first exposed to Alan Ginsberg when I saw him at a poetry reading in my first year of college. He appeared with Lawrence Ferlinghetti (who I had never even heard of) and Timothy Leary. It was the first time I had ever heard poetry read to an audience and it shocked me. Using language in a public space in this way was like being in an alien environment. Ginsberg’s reading from “Howl” made it all the more remarkable.

Both of these activists began my education about the importance of having a social conscience. I traveled that road that led to further knowledge and understanding about what it means to contribute to something larger than you, to realize that being part of the struggle for equity was a path that I wanted to travel. Eventually the writings and the words of King and Ginsberg (and many others) would become a major part of my teaching practice.

This brings me around to Unpresident Trump. He and the Secretary of Miseducation DeVos chose to make their first joint appearance at a school in Florida. The school was a private religious school and that alone is informative about their position on the value of public education. What was more disconcerting to me was some of the things that were said at that visit. Trump advised a student who said he wanted to be an entrepreneur with the following – “You’re going to make a lot of money, right? But don’t run for politics after you do.” In another instance, the students presented Trump with a handmade certificate and he gave them a photo of himself with them and told them that the photo would “make you famous.”

The juxtaposition of Trump’s words and beliefs with those of King and Ginsberg is striking. Trump has displayed many faults – chronic lying, misogyny, narcissism, racism, white nationalism, greed, and nepotism are just the beginning of the list, but the one that jumps out for me, when contrasting his thoughts with King and Ginsberg is the lack of social conscience. Trump does not recognize the value of the social contract – the concept that we need to care for one another. This seems to be the greatest danger that Trump presents – the pursuit of the dollar at the expense of others. It is why he will always be Unpresident Trump to me.