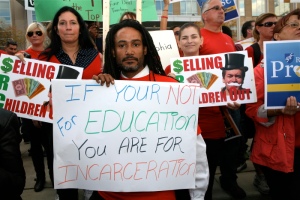 Yesterday I was able to attend the PFT rally held at the Philadelphia School District office building on North Broad Street and I will attach some photos to this blog entry. It was encouraging to find that the crowd was full of parents, teachers, students, union members, and concerned citizens and numbered about 3,000 in the media reports. The Inquirer unfortunately tagged the crowd as ‘angry’ – not sure where that came from because the crowd I observed and was part of was energetic and eager to have their voices heard by the SRC holed up inside. (One great sign labeled the SRC as ‘Sneaky Rotten Cowards” and that seemed to be right on target.)

I have a sense that the movement to fairly fund schools is growing and that the real culprits in the public school crisis are beginning to be seen as our own Governor Corporate (thanks to a facebook friend for that unique name tag – entirely appropriate!), the state legislature, the SRC and the privatization movement represented by many groups. I would like to mention two of them in this entry.

One of the shameful things that both groups do is attempt to co-opt language in order to mask their agendas. First up is the group called the Commonwealth Foundation which is a name that has little to do with the common good. This is the group that refers to the PFT as ‘pathetic for teachers’ and actually hired some fools to hand out anti- union literature at yesterday’s rally. The funding for this group is clouded in obscurity – you can’t find that information on their website. The second group is the Philadelphia School Partnership – again taking a word (partnership) that implies a common good but when you examine their website you find that at least 65% of their funding goes to charter and private schools and when you look for their funding partners you again find a lack of information. When this group has spoken at SRC meetings it is unfailingly to support the charter school movement. If they have supported fair funding for public schools in Harrisburg they do not put that on their website.

In addition to the rally and its varied participants demonstrating a move towards a more democratic approach to resolving the dilemma of public education, there was an article in the Inquirer today that talked about school funding. At a hearing held in Collegeville there were seven school superintendents testifying about the need for a fair funding formula from the state. There was even a Republican legislator who stated that “There’s no logical explanation why some large districts outside Philadelphia get around $10 million a year from the state while a comparatively small Western Pennsylvania district gets $30 million.” Indeed, there is no logical explanation for that and it highlights a need for a fair funding formula, not just for Philadelphia public schools, but all of the public schools in the commonwealth. With the removal of Governor Corbett and the seating of Governor Wolf we can begin to have that conversation in this state. According to the article, Pennsylvania is one of only three states that lack such a formula.

These are encouraging signs and point to a future of promise. Meanwhile there is much work to be done locally. Here in Philadelphia the SRC needs to be eliminated and replaced by a democratic school board – unlike the one that we had before the SRC was thrust upon us. I look forward to being a part of that project that brings democratic values to accomplishing the common good.